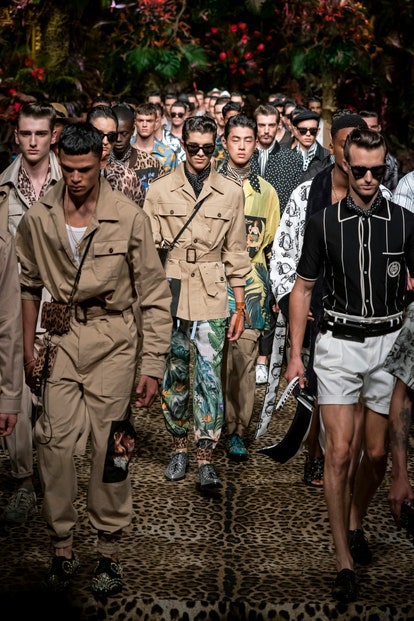 In a context of clear restart, the new edition of Milano Fashion Week Men’s Collection opened with the trends of the next Spring-Summer. The values of turnover processed in the Fashion Economic Trends of Camera Nazionale della Moda Italiana have in fact marked for the months of February and March an important trend reversal compared to the crisis scenario that accompanied 2020. Positive data certainly, but still much lower than in 2019, that is, before the Covid era.

A HYBRID EDITION THAT MARKS A GRADUAL RESTART

A restart, albeit gradual, also for the live shows. The first to have announced fashion shows in presence was Giorgio Armani. King Giorgio borough his men’s fashion to the courtyard of the palazzo in Via Borgonuovo with a double fashion show.

And in presence will also be the catwalk of Armani Privéon the occasion of Haute Couture in Paris. Armani’s Haute Couture will be hosted in the Italian Embassy, a symbolic choice that underlines Milan’s role as the fashion capital of the world.

Etro, who bravely chose to show in presence last summer, did a live show in an industrial space in Via Valtellina, while Dolce & Gabbana was staged at the Metropol in Viale Piave.

Men’s Fashion Week this year was a « phygital » version (i.e. part physical part digital) with only three closed-door shows. Dolce & Gabbana cancelled the show due to health risks and the rest of the brands here’s how to see all the content, collections and insights.

The Milan Men’s Fashion Week includes 63 brands in the official calendar with 48 appointments, 9 presentations by appointment and 6 events.

Only four shows attended: Dolce & Gabbana on June 19; Etro on June 20; and Giorgio Armani on June 21 with a double show.

Among the most anticipated news of Milan Fashion Week 2021 is Diesel’s debut with new creative director Glenn Martens, who will present a no-gender collection on June 21.

Also, on the calendar for the first time will be brands Tiscar Espadas, Mans, Franc Elis, Zenam, Revenant RVNT, 424, KTN and Andrea Pompilio for Harmont & Blaine.

Sustainability and support to young talents are, once again, key points of the activations of Milano Fashion Week in collaboration with Confartigianato Imprese and with the support of the Ministry of Foreign Affairs and International Cooperation and the ICE Agency.

Thanks to CNMI, it was possible to follow the fashion shows, presentations and all the events of June 2021 on the dedicated website milanofashionweek.cameramoda.it. In addition, a series of thematic rooms were host special projects including the third edition of Designer for the Planet, an event dedicated to the collections of some emerging designers, focused on sustainability issues. Moreover, the digital platform hosted a section dedicated to virtual showrooms: multi brand or single brand. Dnepr Fashion Weekend on the 24-26th May 2019: fashion shows, workshops, showroom and more